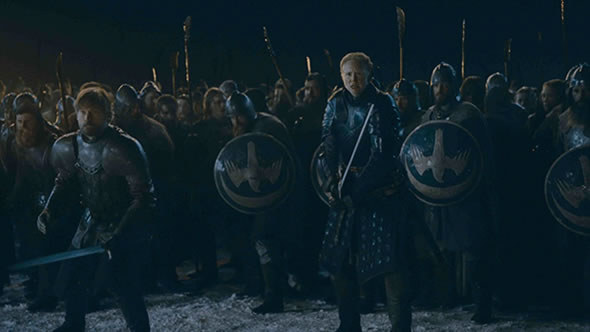 Spoiler warning: This page may contain descriptions of events in this and previous episodes. Watch before reading.

For this final season of the HBO hit Game of Thrones, we are collecting reviews and impressions from professional TV writers for each individual episode, continuing with Sunday’s extra-long “The Long Night,” directed by Miguel Sapochnik. Check this site each Sunday night for reviews of the latest episode.

While we won’t try to assign an overall score to each episode, we have grouped the reviews into rough categories based on critic enthusiasm, beginning with the most positive. Scores for individual reviews are displayed only in those cases where a reviewer has specifically indicated a score. (Those scores have been converted to a 0-100 scale when necessary to facilitate comparison.) “Recaps” are not included if they merely discus the plot details and fail to assess the episode’s quality in any way. Click on any publication name to read the full review. Additional reviews will be added on Monday morning.

Our patience was rewarded with an all-out brawl with some twists, turns and unfortunate casualties that have left our jaws on the floor. … [Benioff and Weiss] know what the fans want and they delivered with this feature-like episode that included one of the most epic battles in the history of TV.

As thrilling as any episode of television ever produced. … “The Long Night” has the kind of existential dread of mass annihilation that is rarely seen on the small screen.

It delivered in ways we never could have expected. … “The Long Night” is such a spectacular achievement in filmmaking – it certainly puts many of the MCU and DC movie universe’s climactic battles to shame, and could easily be measured against the intensity of the Helm’s Deep sequence in Lord of the Rings: The Two Towers – but I had to deduct points based on some of the contrivances of the plot.

Game of Thrones season 8, episode 3 is a relentless hour and a half of battle that feels like twenty minutes, a series of sumptuous visual set-pieces linked by moments of tenderness. … It is epic, gritty, profoundly silly, surprisingly camp – especially the smirking Night King, Darth Frosty himself – but in terms of spectacle, it is the equal of anything to come out of Hollywood.

Sunday’s final clash was a masterpiece of tension and release, goose bumps and heartbreak, grandiosity and intimacy. It deftly mixed genres (horror, action, melodrama), shots and planes of action as it shifted from the chaos of the fighting in and around Winterfell to the claustrophobic terror of the crypts to the dragon dogfighting in the winter sky. … It wasn’t flawless … But in the end, despite the scale of the clash and the endless hype we’ve been hearing about the 55 nights of shoots that went into filming it, et cetera, the Battle of Winterfell actually exceeded expectations.

Yes, this was exhilarating and a spectacular technical achievement in its own right.

We got mostly what we all expected: en episode filled with battle scenes, the dead rising in the crypt and the Night King dying in the end. When you boil it down to “just when it looked like the battle was lost, Arya saved them all,” it does’t sound quite so epic. But this episode did everything it was trying to do. I will proclaim it to be very good.

Did I enjoy it? I don’t think so. It was a marvel, don’t get me wrong, but I can’t say I had fun, even though I absolutely couldn’t look away. I don’t even know the answer to the question of whether or not this was a “good” episode. I think so? The pure outrageous choreography of the whole thing, which apparently took 55 days to shoot, certainly paid off in terms of pure spectacle. But was it great storytelling or simply an exercise in provoking horror before a deus-ex-Arya reversed the narrative in a split second?

Sequence by sequence, this thing was a marvel. Displaying a talent for combining the horror of war with the terror of zombie movies and slasher films, co-creators/co-writers David Benioff and Dan Weiss served up set piece after white-knuckle, seat-edge set piece. … Still, for this show? An 80-minute battle in which zero A-list characters got killed, give or take a Mormont here or a Greyjoy there, is a rare pulled punch, at a moment when it seemed safe — right, even — for the audience to expect a knockout.

There were so many payoffs during this eighty minute spectactular that it’s hard to put into words how well it translated to the screen.

Honestly, a lot of what this episode did right had more to do with the scenes that surrounded the enormous melee than those hyper-edited clashes of swords. … The blurry camerawork (quite literally at times) and rapid-fire editing meant that exchanges of blows that should have been viscerally thrilling were often muddied, good for capturing the mood but not much fun to watch.

[“Experts” review for people who have read the books] To be honest I didn’t really have any trouble seeing things or following the action, and I do think that there’s a scale to this thing (particularly in the landscape shots) that often took my breath away. But now that my breath is back, I’m struck by how much “The Long Night” seems repetitive as it replays in my head while writing, and how the end result revealed that outside of the characters who died, Arya, and those directly involved with Arya, there was a real lack of attention to character as the battle progressed, which lost itself in immersing us in chaos and failed to make that chaos as meaningful as it needed to be.

My biggest complaint about this episode: It was so damn dark. It was hard to see who was doing what. … The Battle of the Bastards will still remain my top “Game” war sequence, if only because every bit of that awesome work was visible onscreen.

While a sustained serving of slashing, stabbing, charging and killing could have rendered the viewer numb, the GOT team fended that off by zigging and zagging all over the place and changing up the tone for several different sections. … Were one or two of the last-second saves a tad convenient? Sure, but the drama was more than enough to make up for that.

A hugely suspenseful and intense 82 minutes of action and thrills. … This was TV’s most relentless and mammoth battle ever, a super-sized series of setpieces that never wore out its welcome and generated constant dread and nerve-wracking suspense.

However, while there was literally no moment of the episode that wasn’t devoted to the battle, what’s fascinating about “The Long Night” is how it seems to take its time with the action, to some degree. It’s hardly a roller coaster ride, but that’s actually why this might be one of the better battle-focused episodes of “Game of Thrones” to date; it makes every moment of dread feel truly lived-in, lets each character beat scattered between the battles sink in.

With three episodes to go, I’m not entirely sure what does matter to Game of Thrones, which appears to have dispatched with the existential threat and is ready to head back to the competition to see who’ll be in charge of Westeros. Which is fine — it’s called Game of Thrones, after all — but I guess I thought preventing the world from being overrun by the icy dead this might require more than one battle. Certainly more than one young woman. Not that the one battle and one young woman weren’t plenty. I’m exhausted just thinking about what went into this episode that I could barely see so much of.

The lighting in this episode was exceptionally beautiful, highlighting shadows and light in an intricate dance of snow and fire. The problem is that it also made it very difficult to see.

Sure, there’s plenty to quibble with. But let’s start by acknowledging that it’s rare, exciting, and pretty cool to see a group of professionals at the top of their game take a swing this big and more or less connect.

In its exuberantly nihilistic willingness to push past the point of viewer discomfort — building from a starting point of extreme intensity to an exhausted, burnt-out stagger towards the finish line — the episode stands in as the ultimate representative of one of the ways “Game of Thrones” has seen itself, as the staging-ground for ultra-violent action whose stakes are the fate of the world. But that’s not the only “Thrones” that exists. And, indeed, there are to be three more episodes of some other series, one in which the series’s most existentially pressing question, the fate of the world in the face of the encroaching Night King, has been settled. … That’s why what may be the passing of one “Thrones” era is as exciting as it is — more exciting, certainly, than much of an episode that tended to spare any top-billed character, preserving the ensemble but reducing the stakes as the viewer got wise to what was going on.

In one sense, “The Long Night” succeeded: It looked gorgeous. … Yet for a feature-length action sequence that Game of Thrones has been foreshadowing since the series premiere, it felt strangely anticlimactic…. Season 8 has now essentially spent three of its last episodes on fan service … That isn’t just lazy, predictable writing; it’s a betrayal of what made George R.R. Martin’s epic so great.

There was beauty and brilliance in “The Long Night,” from the fire motif to Sansa and Tyrion’s moments to its exceptional score. But it was also disappointing. The scenes were often so dark that it was impossible to see the action unless it happened to include fire (thanks a bunch, Drogon and Melisandre). The editing was sloppy at times, and it was hard to tell who was where and how they got there. And despite the high death count, most of our major characters still made it out alive, an illogical outcome considering the enemy.

It’s filled with thrilling moments, last-second heroics, and characters escaping death by the skin of their teeth. It’s also frequently completely incomprehensible. … It also creates a situation where Game of Thrones essentially has to reboot itself with three episodes left in its run. … I was enraptured by long swathes of it, frustrated by other long swathes of it, and deeply confused by certain parts.

Game of Thrones has never been straightforward–until now. … The battle with the dead is over, the Night King is defeated, and the forces of the living are victorious. And it happened in the least inventive, most predictable way imaginable. … There’s no catharsis or payoff in anything that happened in “The Long Night.”

The show seemed both to lose its way artistically and to abandon the moral and narrative nerve that made it a genuine phenomenon. … At the moment when “Game of Thrones” seemed poised to plunge its characters into the event of the episode’s title, it stuck us visually and intellectually in the dark instead. … I love “Game of Thrones”; more than any other work of art, George R.R. Martin’s novels and the television adaptation of them have defined my career as a critic. But “The Long Night” was a powerful, late-in-the-game example of how its showrunners and directors have too often mistaken the show’s weakest qualities for its strongest.

What do you think?

What did you think of Sunday’s episode? Let us know in the comments section below.